I am a huge fan of Dan Abnett’s Gaunt’s Ghosts series: a series that spans 15 novels (including the upcoming Anarch novel).  Gaunt’s Ghosts focuses on an Astra Militarium (Imperial Guard) regiment, whose origins comes from the dead forest world of Tanith; a world destroyed by Chaos.  The regiment is officially known as the Tanith First-and-only; they are unofficially known as the ‘Ghosts’, a nickname Master Sniper Larkins used for the Tanith on their first mission at Blackshard (there, Larkins referred to the regiment as ‘Gaunt’s Ghosts’).

The original ‘Ghosts’ are the last surviving members of their world; with each death, a part of Tanith is lost forever.  As the series progresses and more of the original ‘Ghosts’ perish, new members are adopted into the ranks of the regiment.  With over 100 named characters, at its heart, Gaunt’s Ghosts is a story about the members of the regiments: a story of their struggles, conflicts and friendships. 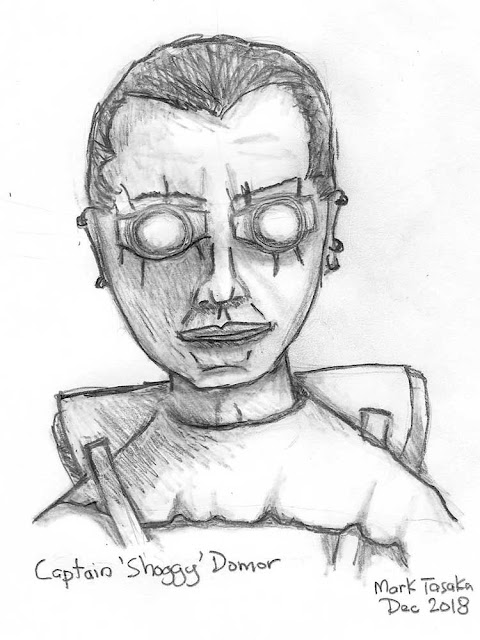 Captain ‘Shoggy’ Domor is one of the original members of the ‘Ghosts’ and is the regiment’s sweeper expert.  Domor, who started out as a trooper at the beginning of the series, lost his eyes on Menazoid Epsilon; one of regiment’s earlier warzones.  Domor’s eyes were replaced with bulky augmetics, which resulted in his nickname ‘Shoggy’: the name of a bulging-eyed amphibian from Tanith.  Domor’s augmetic eyes gives him super-human vision, including the ability to see heat signatures.  A well-liked member of the regiment, Captain Domor currently commands K Company. 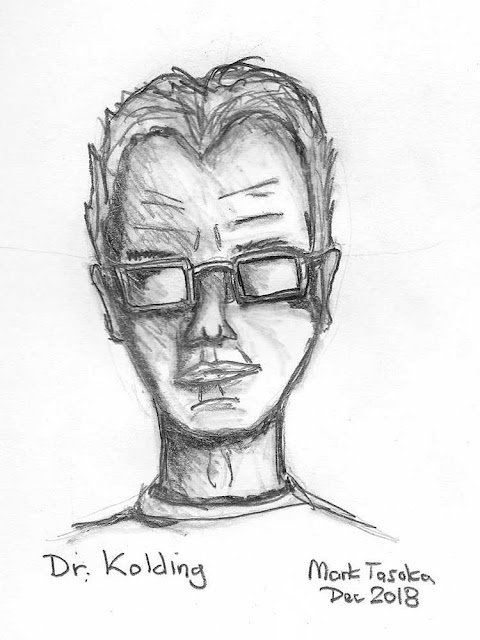 A recent addition to the regiment, Dr. Kolding was introduced in the 12th novel (Blood Pact), where Gaunt and Wes Maggs teamed up with the doctor on Balhaut.  In the 13th novel (Salvation’s Reach), Dr. Kolding was an official member of the regiment. Dr. Kolding is an albino and wears tinted shades to protect his light-sensitive eyes.  Many of the Ghosts refer to Dr. Kolding as ‘Doctor Death’ due to his physical appearance and his past profession as a mortician. 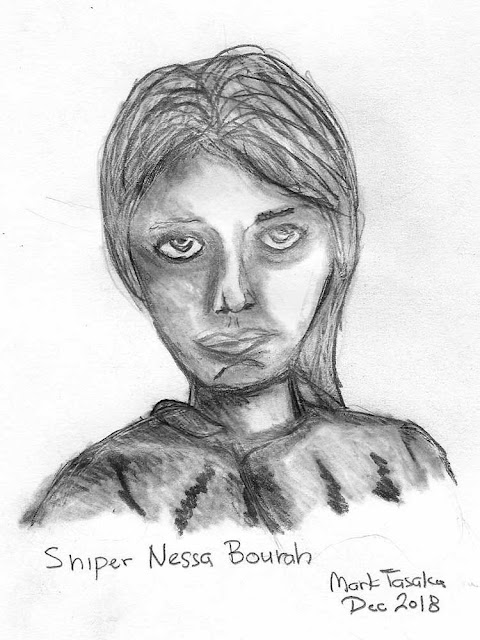 Nessa Bourah is a later addition to the Ghosts, joining the regiment at the end of the 3rd novel (Necropolis), along with an influx of ‘scratch company’ fighters.  Originally a Vervunhive loom worker, Nessa’s former life was shattered by the Zocian War.  She, along with other civilian survivors, joined the scratch companies; companies of guerrilla fighters formed out of the necessity to survive against the onslaught of Ferrezocia invaders (a neighbouring hive city, whose population had fallen to Chaos).  Nessa lost her hearing due to a shell blast during the Zocian War.  After joining the Ghosts, Nessa excelled as a sniper, killing ‘The Marksman’; one of ‘The Nine’ assassins sent by the Chaos Lord Magister Enok Innokenti to kill Saint Sabbat (the 7th novel: Sabbat Martyr).  Nessa is described as being naturally beautiful.