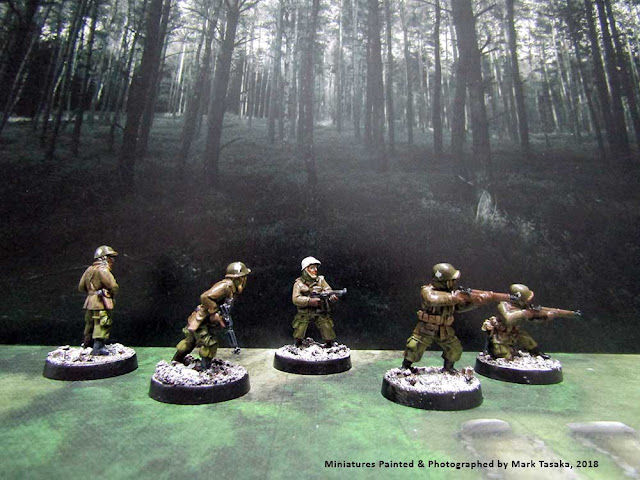 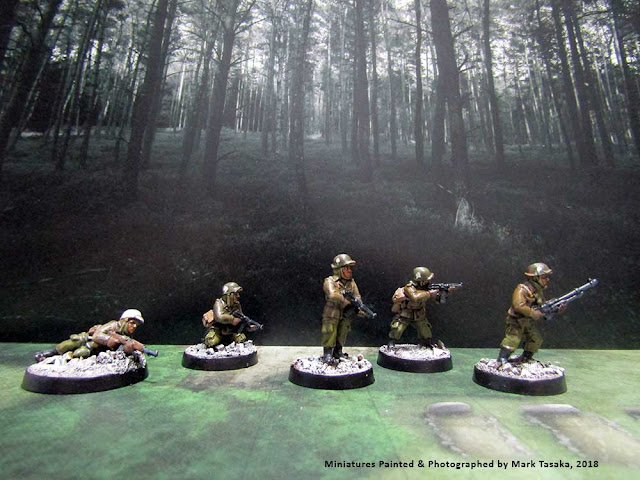 My inspiration for painting these miniatures comes from the Band of Brothers miniseries; in particular Episodes 6 (Bastogne) and 7 (The Breaking Point), which features Easy Company’s experiences at the Battle of the Bulge (Dec 1944 to Jan 1945).  One of the most distinguishing features of the 506th Parachute Infantry Regiment (the regiment that Easy Company belongs to) is the ‘spade’ painted on the sides of the M1 helmets.  Thus, I painted spades on the sides of the helmets to represent paratroopers from the 506th PIR. 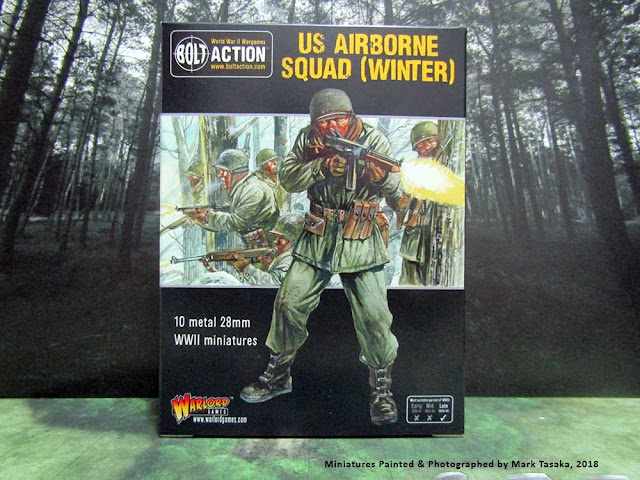 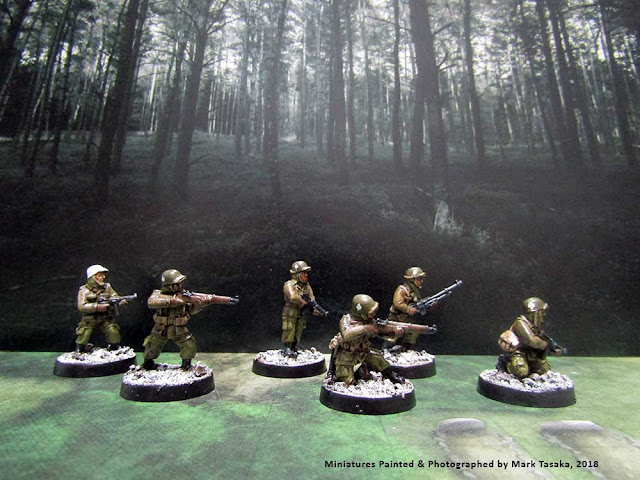 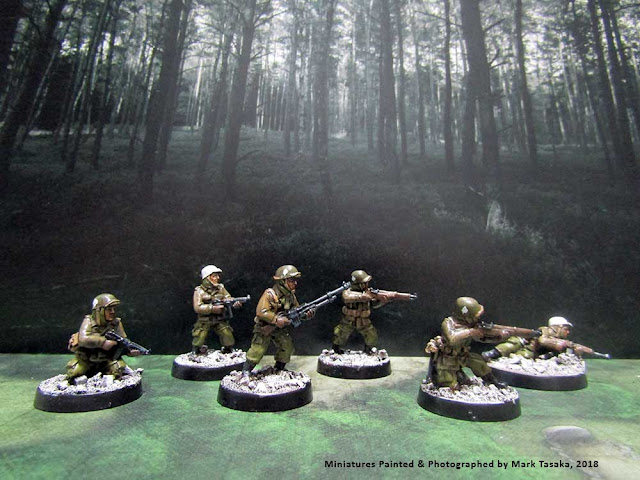 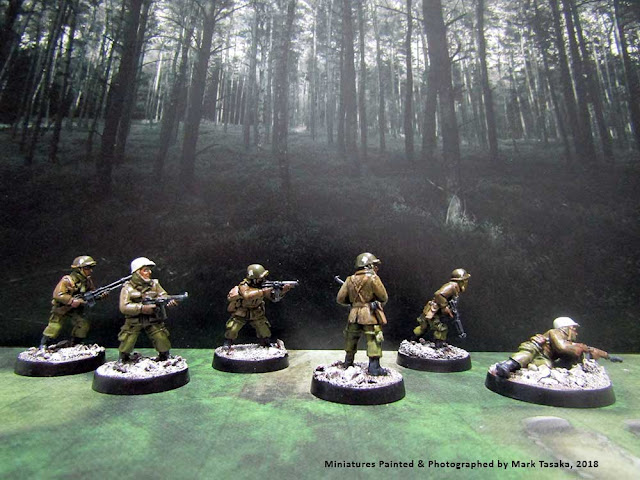 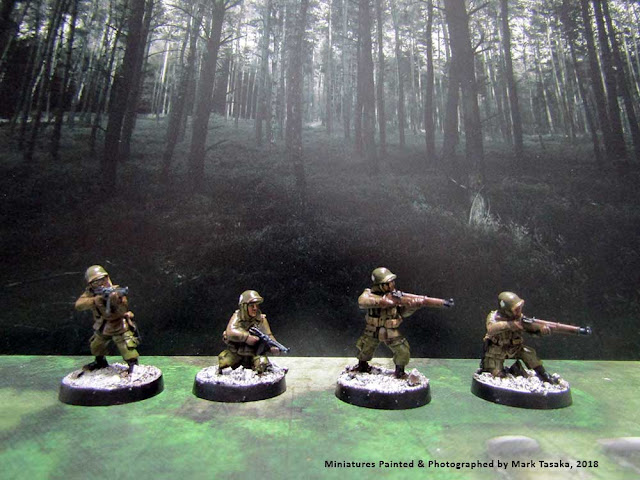 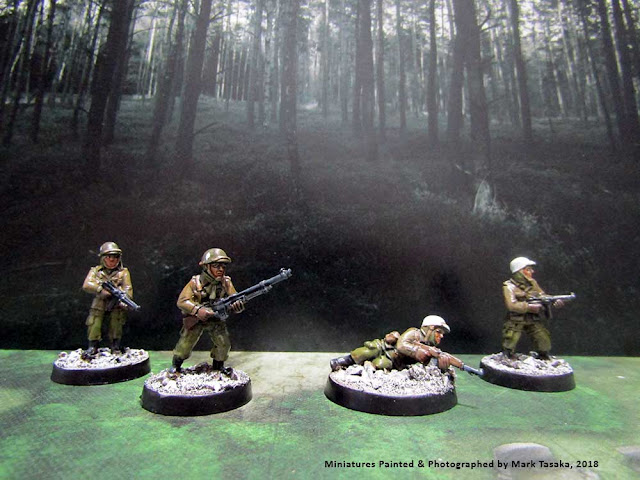 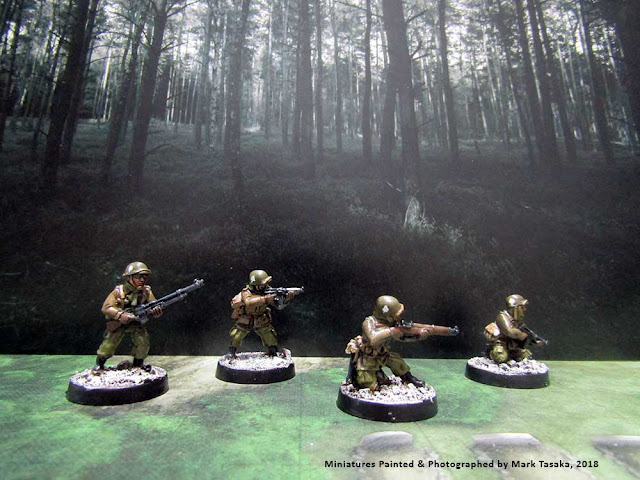 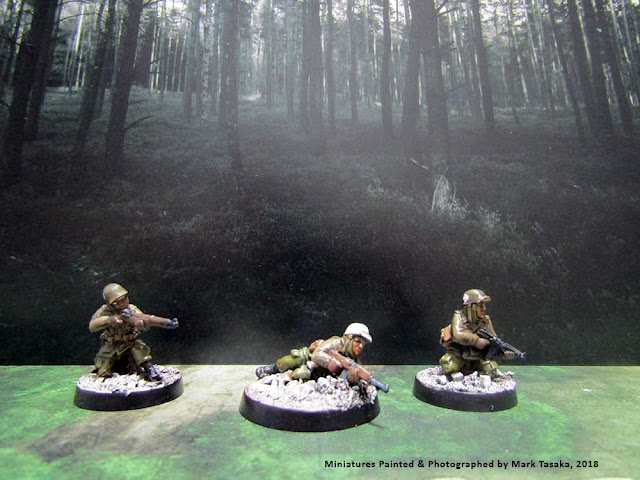 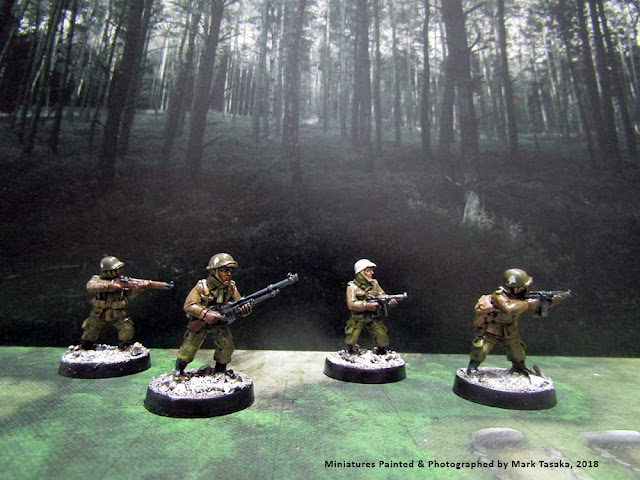 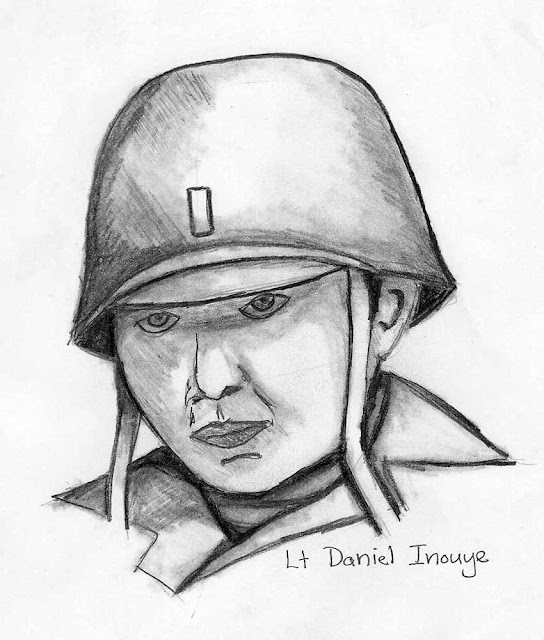 2nd Lieutenant Daniel Ken Inouye was born in Honolulu, Hawaii (then a US territory) on September 7, 1924; his parents were immigrants from Japan.  In 1943, when the U.S. Army dropped its enlistment ban on Japanese Americans from joining the army, Inouye put his pre-medical studies at the University of Hawaii on hold and joined the segregated Japanese-American regiment: the 442nd Regimental Combat Team.

On April 21, 1945, near San Terenzo, Italy, Lt Inouye, a platoon leader, led his platoon in overtaking a heavily defended ridge guarding a road junction of strategic important.  Inouye was wounded multiple times in the firefight; yet, despite his injuries, Inouye personally destroyed several machine gun emplacements.  Inouye’s heroic action that day earned him the Congressional Medal of Honor; however, the wounds he sustained resulted in the amputation of his right forearm.  Among the medals Inouye received in World War 2 are the Medal of Honor, the Bronze Star and Purple Heart.

Following Inouye’s honorable discharge from the US Army in 1947 (at the rank of Captain), he returned to the University of Hawaii, studying political science and graduating in 1950.  Next, Inouye completed his law degree at George Washington University in 1953.  Inouye was elected to Hawaii’s territorial house of representatives in 1953, launching his political career.  In 1963, Inouye became a United States Senator for Hawaii, which he remained until his death in 2012 (Senator Inouye never lost an election in his 58 years as a Senator).  In 2013, President Obama posthumously awarded Senator Inouye with the Presidential Medal of Freedom. 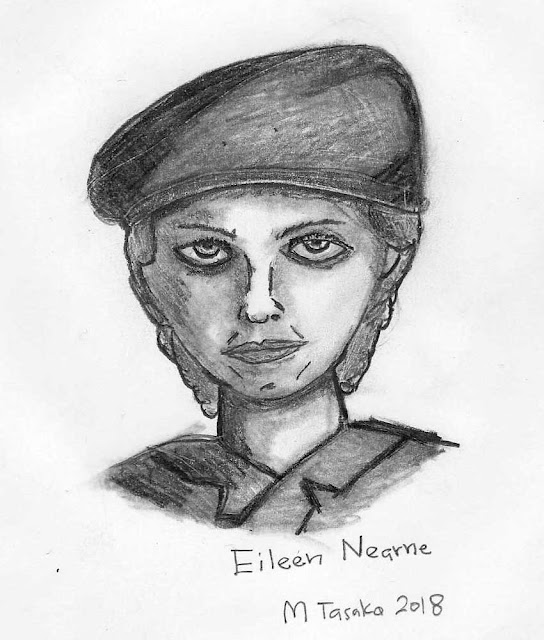 Eileen Nearne served in the United Kingdoms’ Special Operations Executive as an undercover radio operator in Occupied France.  Born in London, her family moved to France when she was two; thus, Nearne was fluent in French.  After the German invasion of France in 1940, Nearne and her eldest sister, Jacqueline, fled France, arriving back in the UK.  In the UK, Nearne and her sister were recruited into the Special Operations Executive.  Her sister was sent to Occupied France to work as an undercover courier.

Nearne started her work with the Special Operations Executive as a home-based signals operator.  In March of 1944, she was sent to Occupied France, where she operated under the code name ‘Rose’ and was responsible for maintaining a wireless link to London.  In the course of five month, Nearne transmitted 105 messages to London.

In July of 1944, Nearne was captured by the Germans.  Nearne underwent torture at the hands of the Gestapo (German secret police).  Later, Nearne was transferred to the Ravensbruck Concentration Camp (Germany) and then to the forced labour camp in Silesia (Germany).  In April of 1945, Nearne escaped her work gang by hiding in the forest; she fled to Markkeeberg, where a Priest in Lepizig provided her shelter (she remained there until the arrival of the US Army liberation forces). 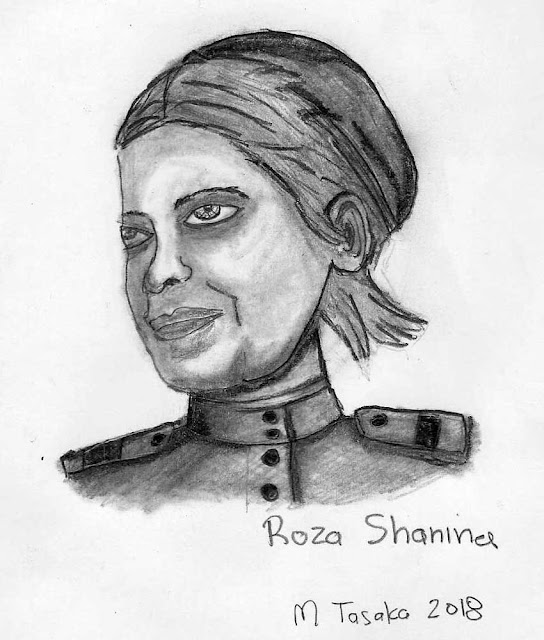 From 1941 to 1945, at total of 2,484 Soviet women served as snipers in the Red Army, accounting for a combined total of at least 11,280 confirmed kills. Senior Sergeant Roza Shanina was one of these women.  At the time of joining the Red Army in 1943, Shanina had lost three brothers in the war.  Shanina served in the Vilnius Offensive (June to July 1944) and the East Prussian Offensive (January to April 1945).  Shanina was the first Red Army female sniper to receive the Orders of Glory.

Through the course of the war, Shanina’s accuracy and marksmanship skills became legendary; especially her skills at making doubles: making two kills by firing two rounds in quick succession.  Shanina excelled at counter sniper tactics and is credited for 59 confirm kills. On January 28, 1945, at the age of 20, Shanina died a heroic death, selflessly shielding a wounded artillery officer from German fire (she was severely wounded on January 27 and passed away the next day).  Of the 2,484 women snipers who served in the Red Army, only around 500 survived the war.

Senior Sergeant Shanina was decorated with the Orders of Glory (2nd and 3rd class) and the Medal of Courage; she was Mentioned in Dispatches on multiple occasions.  Shanina was also wounded in combat from a German sniper on December 12, 1944.

In the next post in this series, I will be exploring Sergeant Tommy Prince (Canadian Army, First Special Service Force) and Technician Fifth Grade James Rookard (US Army, 514th Quartermaster Regiment).