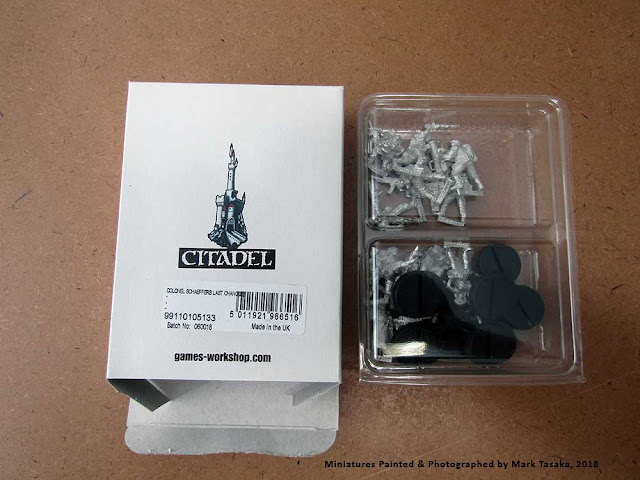 This is my 13th published post: a fitting tribute to the Thirteenth Penal Legion of Warhammer 40,000.  For fans of the GW metal miniatures of the late 1990s/early 2000s, Games Workshop sells several of their older ranges through their online store (webstore exclusive).  I recently picked up Colonel Schaeffer’s Last Chances; a metal range of twelve figures, including the infamous Colonel himself.  The Last Chances were sculpted by Alan and Michael Perry in the late 1990s.  Each of the twelve miniatures has a distinct look and are given individual names: Colonel Schaeffer, Hero, Animal, Shiv, Grease Monkey, Warrior Woman, Demolition Man, Ox, Scope, Rocket Girl, Fingers and Brain.  I have never read Gav Thorpe’s The Last Chancers series of novels, so, I am unsure if these miniatures represent specific characters from the series. 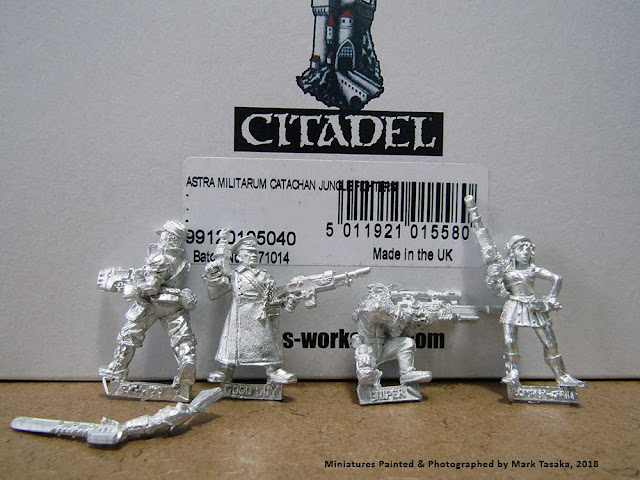 Price: Colonel Schaeffer’s Last Chances are priced at $50 Canadian, which works out to ‘$4 & change’ per figure.  This is an excellent price for GW metal miniatures.  Plus, shipping is free on order of $80 Canadian or more (I added a squad of plastic Catachan Jungle Fighters to my order and received free shipping). 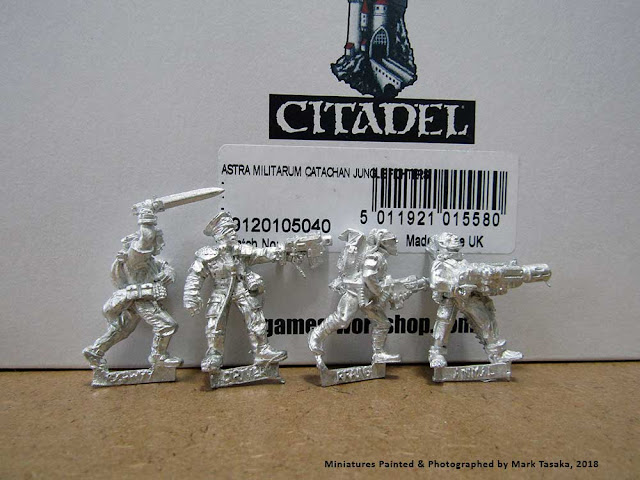 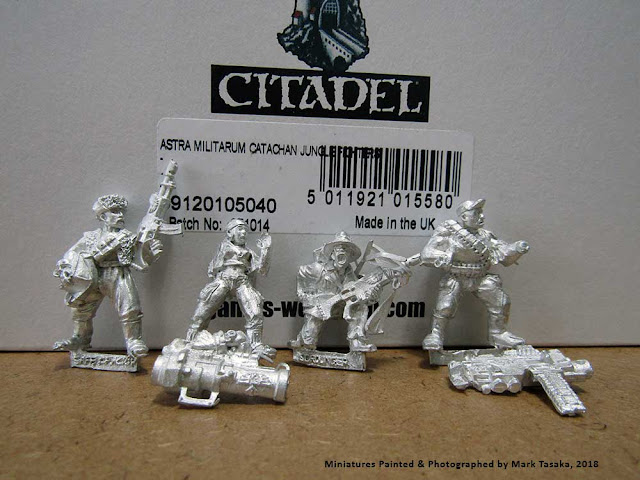 Preparing the Miniatures for Painting:  I like to wash my metal miniatures in soapy water to remove any of the residue left by the mold release agent before I prime my miniatures.  After I have glued my miniatures to the ‘slotta’ bases, I use some epoxy putty (green stuff) to fill in the gaps in the ‘slotta’ areas of the bases. 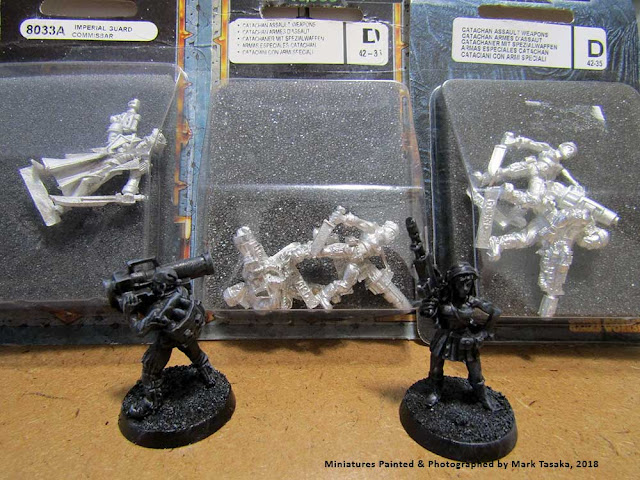 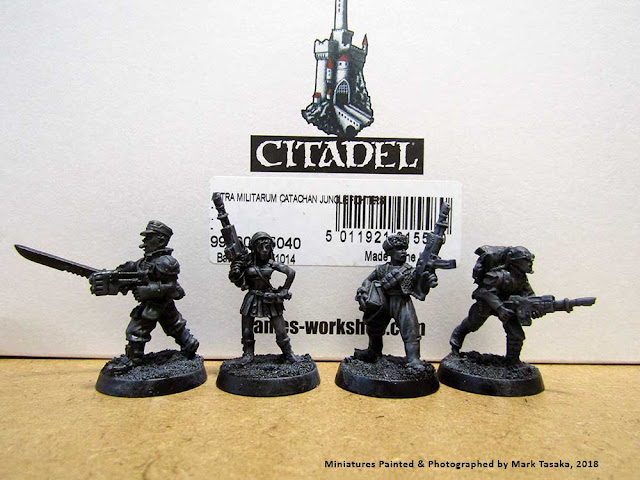 While slightly below the sculpting calibre of today’s Games Workshop’s plastics kits, Colonel Schaeffer’s Last Chancers are great looking miniatures, reflective of the high-quality metal miniatures Games Workshop produced in the late 1990s.  Each of the Last Chancers has a distinctive look, reflecting the diversity of the Imperial Guard (Astra Militarum).  Priced at $50 Canadian for 12 miniatures, Colonel Schaeffer’s Last Chancers are an affordable way to add characters and special weapons to your Imperial Guard army.

Colonel Schaeffer: The cigar smoking colonel carries a plasma pistol in one hand and a close combat weapon in the other hand.


Warrior Woman: Dressed in a sport’s bra and a mini-skirt, Warrior Woman holds a lasgun and has a sheathed sword strapped over her shoulder.


Demolition Man: Wearing a military style fur hat, a fur vest and baggy pants, Demolition Man wields a lasgun in one hand and carries a bag of explosives in the other hand.


Brains: A bald headed warrior with wiring connected to his skull, Brains is armed with a lasgun. 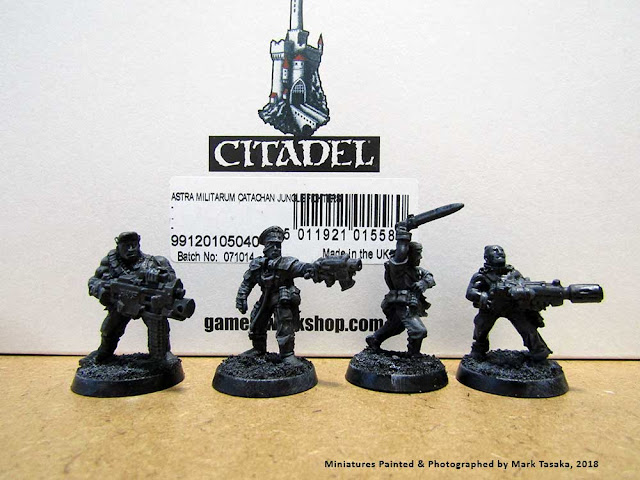 Ox: A muscle bound guardsman carrying a heavy bolter in a similar fashion as ‘Try Again’ Bragg (Gaunt’s Ghosts) and Sergeant Harker (Catachan).  This miniature could easily represent a heavy weapons trooper in a Catachan army.


Animal: Wearing shackles around his ankles, wrists and neck, Animal wields a meltagun and has a chainsword strapped to his back. 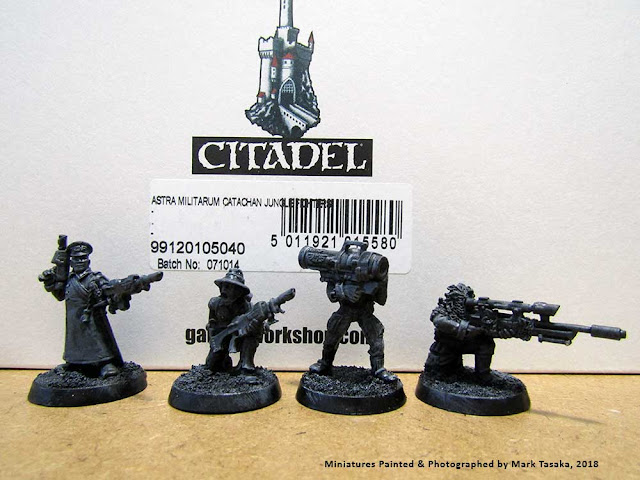 Hero: Dressed in a long overcoat and wearing a peaked cap/forage cap, Hero wields a lasgun and a laspistol in each arm.  Strapped to his belt is a sheathed sword.  The Hero miniature could be used to represent an officer in a Mordian Iron Guard army.


Rocket Girl: Wielding a rocket launcher and wearing a bandanna, Rocket Girl has the fierce look of a Catachan Jungle Fighter.


Scope: Outfitting in a ghillie suit, Scope sits in a kneeling position aiming his deadly sniper rifle. This miniature could easily represent a sniper in a Catachan or Cadian army.
at April 24, 2018 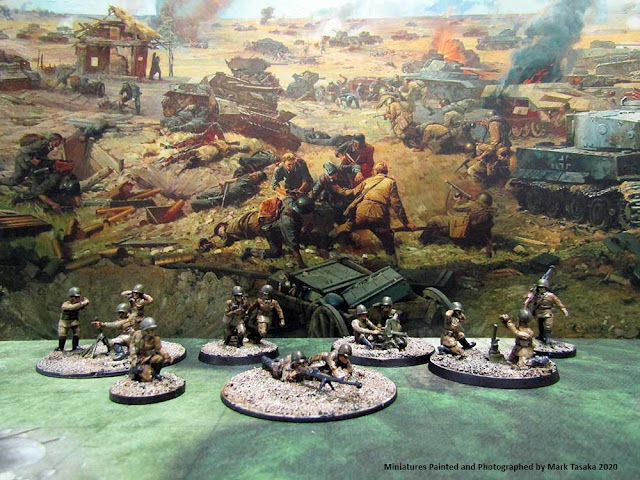